What are Compulsions and Compulsive Behaviours?

You would normally hear or read about compulsive behaviours and disorders being linked with Obsessive Compulsive Disorder (OCD), which is a diagnosis widely used within the mental health profession. 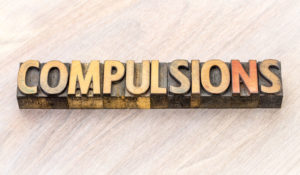 As a rule of thumb, a compulsive behaviour is one that is undertaken, often with little thought, on impulse or with a sense of having been ‘driven’ to it, and instant relief is felt.

There may be some feelings of guilt or shame felt afterwards, but immediate gratification is felt at the time.

For obsessive thoughts and behaviours, this sense of relief is often never achieved.

The person is likely to focus excessively on the issue at hand, often becoming totally preoccupied  by it; they can find themselves involved in repetitive cycles of behaviour which provide little or no relief, and sometimes activities are carried out to ensure something else (often something bad) does not happen.

The different types of Compulsions

One of the issues with compulsive behaviours is that most of them undertaken to excess can have very damaging impacts on people’s lives:  the compulsive shopper may find themselves heavily in debt or even bankrupt, while the compulsive self-harmer may place their life in jeopardy on a regular basis.

The following list is not exhaustive, but covers the more common compulsive behaviours that have been helped with Hypnotherapy:

Please do not be put off if your particular issue has not been identified in the list above:  compulsive behaviours and disorders are so varied and often specific to the individual that it would be impossible to list them all here.

What is important to realise is that it is the underlying reasons for the behaviour that is significant and it is this that is treated with hypnotherapy, rather than the precise behaviours themselves.

How Hypnosis and Hypnotherapy Can Help with Compulsions

Many people who have compulsive disorders and behaviours find themselves feeling a little out of control or driven by factors they can not understand.

Sometimes people may feel a little ashamed or guilty about their compulsive behaviours and therefore avoid seeking help.

II offer a FREE 15-minute phone consultation for information about hypnosis, fees and insurance, scheduling, and how hypnosis may benefit you or a family member.